‘Chronic illness is a lonely thing’ by Karen Tomkins

‘Chronic illness is a lonely thing’ by Karen Tomkins

For the past year I religiously text my husband, Shea, every Friday afternoon. There’s nothing unusual in that, but the weekly message contains just a number, no words. Triple digits and we’re happy; single digits and it’s time to get family in to mind the children and pack a bag for hospital.

The number I text is my platelet count. I am one of approximately 1,000 people in Ireland with ITP (immune thrombocytopenia), a rare blood disorder in which the immune system mistakenly attacks its own platelets. It can occur in pregnancy, follow a virus, vaccination, or certain medications, but for most people the cause is unknown. 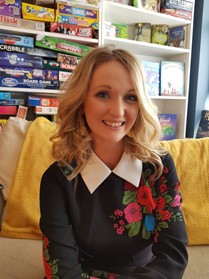 Karen is one of around 1,000 people in Ireland with ITP.

I learned about the importance of platelets in my first pregnancy, in 2007. As the Syntocinon drip unleashed contractions from hell on this novice labourer, I remember the midwives telling me that I only barely made the threshold for an epidural with a platelet count of 80 on the day. It meant absolutely nothing to me; I got my epidural and my baby boy, Jack, now heading for 14 years of age.

My gestational ITP was confirmed earlier on in my second pregnancy, in 2010, when my platelets fell into the 30s. A normal platelet count ranges from 150,000 to 450,000 platelets per microlitre of blood. This is usually referred to by the first three numbers 150 - 400. With ITP, a “watch and wait” approach is often adopted by haematologists when a patient’s count is between 100-50 and often down to 20-30. Mild bleeding and bruising sometimes occurs when the count is less than 50.

The risk for serious bleeding doesn’t occur until the count becomes very low – less than 10. Internal bleeding and a bleed on the brain are the biggest risks at this point, which can be fatal. The UK’s ITP Support Association lists blood in the eyes, bleeding from the ears, blood in the urine, bleeding from the gut and a bleed into the brain (in a small number of cases) as severe symptoms of a very low count.

Thankfully, the ITP in that second pregnancy was managed with immunosuppressant Prednisolone steroids throughout. I had another epidural and another baby boy, Harry.

As predicted, the ITP went away and as predicted, it came back again on my third pregnancy, five years later. I began to take a high dose of steroids at nine weeks as my platelets were already hovering at 30.

Announcing the happy news at 12 weeks was quickly met with despair.

Christmas Day 2015 at our Co Wexford home: Santa had been and gone and the boys, aged eight and five, were deep in an ambush of new Nerf guns. I smiled through their excitement but couldn’t ignore the bleeding I had noticed when I went to the toilet. But what does a pregnant mother do on Christmas morning when it looks like the inevitable is happening? In between carving the turkey and greeting family, the bright red blood was hard to ignore. But it only happened when I went to the toilet and my mouth and lips were filling with black blisters. I sneaked upstairs to phone the midwives on the University Hospital Waterford labour ward. No cramping, no clotting, no blood apart from in the toilet. “Keep an eye, it could be spotting. Come straight in if it gets worse.”

It’s hard to find anywhere to go on St Stephen’s morning when you’re killing an hour waiting for the phlebotomy department to process bloods. But I didn’t have to worry. We weren’t far from the hospital when their number flashed up on my phone. “Are you close by? You need to get back straight away. Your platelet count is at 1 – this is really serious, Karen.”

Under the care of haematologist consultant Prof Ezzat Elhassadi, I was given a platelet transfusion and started what would become countless rounds of intravenous immunoglobulin (IVIG), a type of antibody treatment, extracted from the combined plasma of more than 1,000 screened blood donors. It’s given intravenously over a few hours. On a non-medical note, I can tell you it comes in a cute little glass bottle. Not so cute when you need 3½ glass bottles every time, which took up to eight hours. 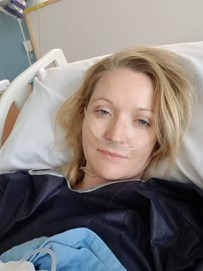 My unborn baby was thriving, but my ITP was still dipping to dangerously low levels. Surgery to remove my spleen and a medical termination were mentioned as treatment options. The pregnancy was causing a risk to my life if my platelets plummeted and couldn’t be feasibly increased. It is said that the eye of the storm is often the calmest place to be, and that’s where I, my husband and my baby stayed. My own multidisciplinary team of family, friends, neighbours, and the parish priest were all working around the clock helping us out at home.

In March 2017 I woke up with a blinding headache, a body of bruises, a mouth full of blood blisters and a platelet count of 1

I became a regular at the oncology and haematology day ward for weekly, sometimes fortnightly rounds of IVIG along with tapering off steroids. The treatment and the prayers worked and at 36½ weeks, consultant obstetrician Dr John Bermingham persuaded my beautifully healthy little girl, Daisy, to make her appearance.

In March 2017 I woke up with a blinding headache, a body of bruises, a mouth full of blood blisters and a platelet count of 1. In the four years that followed, it was apparent that I had progressed from gestational to chronic ITP. A bone marrow biopsy didn’t show anything sinister – just bad blood which I had to accept and learn to live with.

I’ve seen a lot of Prof Elhassadi and his team since then. We’ve worked through many different treatments from steroids, new high-tech drug Eltrombopag to four rounds of a biologic called Rituximab and Mycophenolate (also used to stop the body rejecting organ transplants) – some of which I lost my response to, while others caused unpleasant side-effects.

I returned to work as a news broadcaster, incorporating my haematology outpatient appointments as a way of life. When my platelets dropped, I’d go back on steroids and then taper off them slowly. The longest stint of taking them was for 10 months in which time the biggest side effect was steroid “moon face” and tighter clothes.

I’m grateful for the fact that despite having my platelets at “life-threatening” levels, I never experienced the awful stuff I find on Google at 3am when I can’t sleep

Covid lockdown was worrying but my platelet level stayed above 100 without any treatment throughout. I’d like to think it was in part due to the chakra rebalancing I had done by a faith healer. I’ve drunk oceans of beetroot juice and papaya leaf extract, I’ve tried a plant-based autoimmune protocol diet, I’ve touched a relic of Padre Pio, I’ve boiled up Chinese herbs that stank the house out, I made my husband rearrange our bedroom to move us out of a geopathic stress vortex and I meditate and run every day when I’m well. And still, regardless of what I do or don’t do, ITP has always found me again.

Last August, I got a phone call from the hospital just after I read the main lunchtime news on WLRfm. Not quite headline news, but my platelets were at 17 and it was time to begin treatment again. This time, I opted for N-plate – a weekly subcutaneous injection of Romiplostim administered in a day ward at UPMC Whitfield hospital in Waterford.

For more than a year, I devoted every Friday to getting this injection, which is a two-hour round trip and a day chalked off my calendar. While Romiplostim has had varying degrees of success, I found it very inconsistent and although I can’t attribute the onset of frequent ocular migraines and severe joint-pain as direct side-effects, my quality of life slowly diminished. My recent 40th birthday fell on a Friday – injection day – sweetened only by the kind gesture of chocolates from the day ward staff. 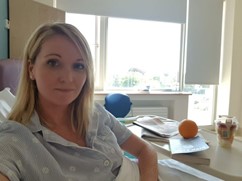 Karen had a splenectomy at UHW in September 2021.

Twenty-four hours after receiving the Moderna Covid vaccine in April 2021, my platelet count was back at 1. It stubbornly rose and I let go of my stubborn refusal to consider a long talked-about second line of treatment – splenectomy. In people with ITP, the immune system treats platelets as foreign and destroys them. The spleen is responsible for removing these damaged platelets and so, in about 70 per cent of cases, removing the spleen can help to keep more platelets circulating in the body.

I’m grateful for the fact that despite having my platelets at “life-threatening” levels, I never experienced the awful stuff I find on Google at 3am when I can’t sleep. However, chronic illness is a lonely thing and I’m guilty of masking my pain, fatigue and worry with fake tan, gym leggings and a smile. It forced me to give up working full-time as a news journalist, although it helped me to find my real passion as a children’s creative audio writer, for which both my radio series won IMRO awards, in 2020 and 2021.

On September 9th, I took my 70 per cent chances and Prof Fiachra Cooke laparoscopically helped me bid farewell to the little organ that I might be better off without.

Karen after winning an IMRO award for her work in 2020

“It’s not you, it’s me,” I whisper to the empty space in my upper left abdomen which used to house one of the chiefs of my immune system. In its place I’ve had all necessary vaccines and will have to take low-dose antibiotics for life.

One-week post-surgery saw my platelet count rise to 783. This dropped to 45 after a month, but it climbed again without any intervention and today my platelet count sits at 100. It’s still early days and I have other treatment options if this doesn’t work in the long term. But for now, I have high hopes, a high platelet count and no bad blood.

This article was first published in the Irish Times and has been reproduced with the kind permission of Karen Tomkins.