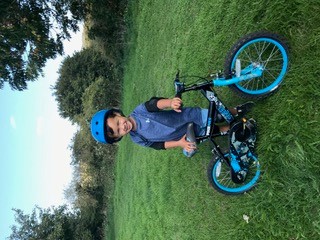 ‘Chronic ITP’ the words that came from my sons haematologist at Southampton General Hospital after his bone marrow aspiration. The words we were dreading, the words which were also a relief, as this meant there weren’t any other health issues underlying. The words that my son, in his innocence, did not truly understand.

Zayn was only 2 years old when he was admitted into St Richards Hospital, Chichester, with a high temperature which would not go down even with Calpol. He was lethargic and had a purple pin prick rash on his chest, which would not go away when a glass was put on it.

It was a scary few hours, with the doctors thinking it could be meningitis. But after blood tests, it was thought that this was not meningitis, but a bacterial infection called tracheitis. Zayn was given strong antibiotics through intravenous which made him extremely poorly. After a day or so, more blood was taken and then the consultant came again to ask for more blood as they were concerned that his platelet levels were dipping. (By this point Zayn was fed up with bloods being taken and we had to have a therapy dog in to help take Zayn’s mind off of it, along with 7 members of staff to help keep him as still as possible). We were reassured that his platelets were probably low due to the infection and that they would most probably return to normal after the infection had gone.

Zayn was well enough to go home after a few days with his cannula still intact. We had to return daily for antibiotics and blood tests. Other parents will sympathise; this was not an easy task. By now, Zayn knew what was coming and got himself into such a state having bloods taken- it was heart wrenching watching him go through this. We tried everything from distractions, sweets, toys, but it really didn’t help much.  Eventually with time, we spent time with the fantastic play team at St Richards; Kerry and Shelly. They worked so hard to help Zayn with the process of taking his blood. They made games up and explored the equipment that was used.

The fantastic consultant, Dr Sharp, we were assigned told us about ITP and explained that this was what Zayn had, what it was. But it was acute at the moment - it could go away. A lady from the research team also gave us some information and asked if we were happy for them to access Zayn’s notes, to help them with this rare condition.

As parents, this was a scary time for us. We had never heard of this condition and we were worried for our son and his future. We went home and researched on the internet for hours. What would ITP mean for our son? What would need to change in his life? It was a very unsettling and worrying time for us as parents and we would watch Zayn constantly.

Zayn was a very active toddler: he would climb, run and had no fear; we were nervous wrecks. We sat and chatted with him about his condition, trying to put it in simple context. He didn’t fully understand- how could he, he was only 2!

But then we found the ITP Support Association website, the support meetings they held and Facebook groups. It really helped us. We read information and chatted with other parents who were in the same situation.

Challenges arose all the time; blood tests, a bone marrow biopsy, fatigue, pains, medication, illnesses, immunisations, should we let our son do a particular activity? We soon realised we had to let our son be the active boy he was, albeit with safe precautions and obviously, dependant on what his platelet levels are. So, Zayn learnt to ride his bike (at just 3 years old). He donned his helmet, knee and elbow pads and after just 15 minutes on grass practising, he was off!  Cycling has helped Zayn keep active and fit, especially through covid- even riding 18km! We found that we needed to embrace the ‘good days.’ When Zayn’s platelet levels were stable, he was not fatigued, agitated or telling us of pains in his legs and tummy. Zayn continues to amaze us every day. He is a resilient, enthusiastic boy with a very strong ‘can do’ attitude.

Our next challenge as parents is school. Zayn will be starting reception this month (September). We have met with teachers and have devised a health care plan for his needs and have discussed symptoms Zayn can show. It is a daunting time, but we do not show Zayn our worries. We want this to be an exciting time for him.  He is excited about his new adventure and we have talked a great deal at home about school and how he needs to be aware of his condition more than ever. Zayn has shown a better understanding of ITP, although it still frustrates him, with him often saying ‘Oh I wish I didn’t have a blood condition!’ which is heart breaking. But Zayn is so much more than his condition, as are all the other ITP warriors out there- you are amazing!

To all you parents out there, keep strong and keep supporting your littles ones; you are doing a fantastic job!

Zayn will be raising money for the ITP support Association and awareness for ITP this September, by doing a cycle around Goodwood Motor Circuit.  If you would like to donate to his page, please visit https://uk.virginmoneygiving.com/GemmaAnkouri