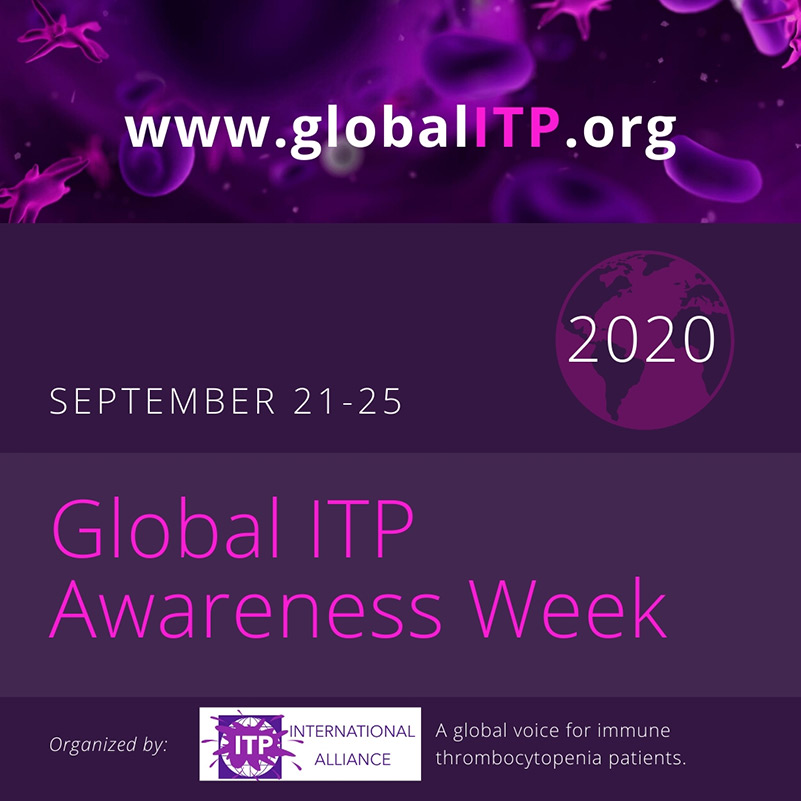 Immune Thrombocytopenia (ITP) is the most common autoimmune bleeding disorder affecting 10 times as many people as hemophilia, yet is unknown to most.

Beginning 21st September  and ending on 25th September (Sport Purple for Platelets Day), ITP patient support organizations from around the world will observe the third annual Global ITP Awareness Week.  During this week, thousands of individuals and families around the world will join together to promote public awareness of this rare disorder and share their ITP Warrior stories in their fight against ITP.

Global ITP Awareness Week will feature a social media-based photo-sharing campaign called, “Going #global4ITP”.  Participants from around the world will celebrate the power of purple as they share their photographs with sign depicting their country demonstrating how widespread ITP truly is.

ITP is a condition in which the blood has a lower number of platelets than normal. Platelets are cells that help the blood clot. ITP is called an autoimmune disease since it is the result of the body's immune system attacking platelets as if they are foreign cells. A person with ITP is at a higher risk of bleeding. ITP is often accompanied by fatigue and sometimes depression and has a profound impact on a person’s quality of life.  This lack of public awareness leaves many ITP patients feeling isolated and alone, and is the main reason why there is so little support for research on ITP and the lack of advancement in treatment. ITP is a growing but little understood health problem that most people (including some medical professionals) have never heard of. It affects individuals of all ages, sexes, and ethnic origins.

The International ITP Alliance of patient support organizations from around the world play a vital role in education, awareness and establishing a global voice for immune thrombocytopenia patients.

The following are resources to help increase awareness in local communities and on social media.
How to Participate: