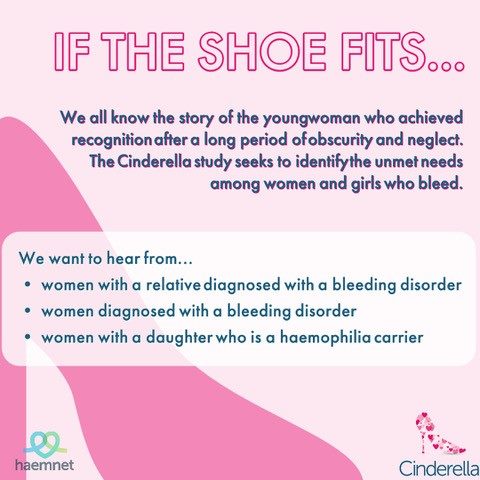 The ITP Support Association are proud to support Haemnet and the Cinderella Study survey! If you're a woman and have been affected by a #bleedingdisorder, please do get involved and complete this survey. Link https://haemnet.typeform.com/to/uWufTI

The following is the text published by Haemnet highlighting why there is a need for this survey:

An exploration of the lived experience and unmet medical need of women who bleed There is growing recognition that women are overlooked and underserved in terms of research and access to treatment options and services, because the  impact of biological differences between men and women has traditionally not been considered in healthcare.

While there are many similarities between men and women, there are also a lot of differences. Women have different risk factors for certain diseases and may also respond differently to various treatments and medications. However, until the 1990s, women were excluded from most clinical trials and as a result, many prescription drugs and treatment protocols in use today have been disproportionately studied on men and not designed to meet women’s needs.

The Cinderella study will start with a social media-based survey of women who bleed focused on the symptoms and experience of health care services. We will work with the UK haemophilia societies and ITP support group to promote the survey to women. Subsequently, we plan to host six focus groups across England (Birmingham/the Midlands, Leeds/Bradford/Sheffield, Manchester/Liverpool/ the North West, Basingstoke/Oxford, Bristol and the South West, and London) to gather greater detail on the lived experiences of women who bleed.

The aim is to better understand:

Outputs from the study will be developed for publication in clinical journals, along with abstracts and posters for use at conferences. The publication plan will be finalised in conjunction with the Steering Committee and other stakeholders, and will include materials to be fed back to those affected individuals who have contributed to the study through social media and patient support groups/organisations.