NHS Blood and Transplant is today (Wednesday July 21) launching its first campaign for people to donate plasma for medicines. 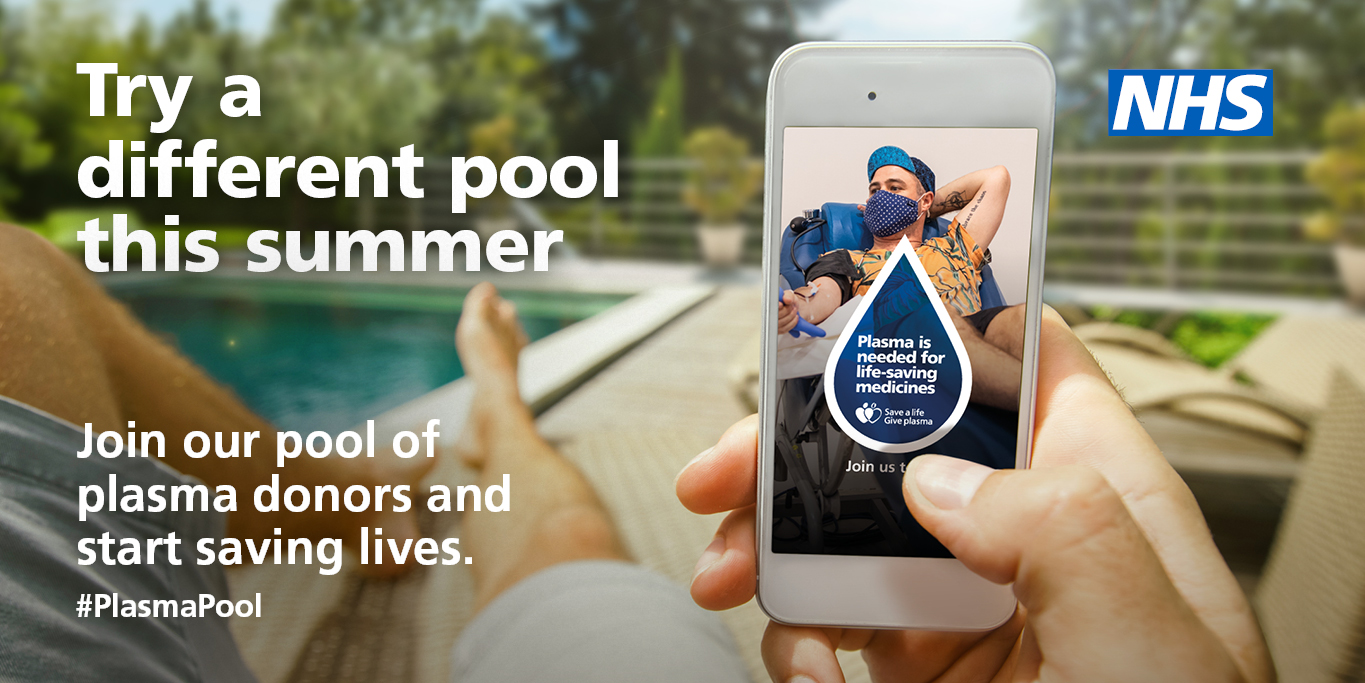 Donation only restarted in April after a gap of more than 20 years and few people know what plasma donation is. An NHSBT survey shows only 23% of the public know about it. (1)

This lack of awareness is contributing to a shortfall in donors. There are currently only 8,627 active plasma donors into the new network. NHSBT needed 15,000 donors by now (July)

NHSBT is appealing for 14,500 people to start donating plasma within the next three months. That will get donation back on track, as the new plasma donation network develops. (2)

Donated plasma will be made into antibody medicines known as immunoglobulins, which are used to save the lives of people with immune disorders. Around 17,000 people a year receive these medicines (3). Many recipients are clinically vulnerable people who have been shielding during the pandemic.

Immunoglobulins are mainly used to treat immunodeficiencies (for example, when people lack antibodies to fight infections) and neurological disorders (for example, when the body’s immune system is attacking itself). It takes hundreds of different donations to make one treatment.

To recruit the lifesaving donors needed, NHSBT is working with partners and running a campaign with a call to ‘join the donor pool’ over the summer, asking people who may not be able to enjoy a holiday to help build the pool of active donors. NHSBT will be working with national and local partners to drive new donors to the 11 new plasma donor centres. (4)

The campaign will include educational content to address the long gap in public donation. There was a ban on using plasma from UK donors for these medicines from 1998 to February 2021, as a vCJD safety precaution. The independent experts of the MHRA concluded that it could safely be restarted. (5)

Donation to NHSBT will improve long term supply. Currently the NHS depends entirely on imports of blood plasma from other countries – mainly the US – to manufacture immunoglobulins. The plasma being donated to NHSBT now will reach hospitals in England from 2022 onwards, following the manufacturing process to turn it into a medicine.

Due to a large rise in global demand for immunoglobulins, both plasma and immunoglobulins have experienced ongoing pressures on supply in the UK and around the world in recent years. The impact of the COVID-19 pandemic on donations in the US has also increased pressures on international supply.

Left to right – plasma for medicines donation,  a unit of donated plasma, an immunoglobulin infusion in hospital.

Dr Gail Miflin, Chief Medical Officer for NHSBT, said: “The long period without plasma donation in the UK means that while plasma donation is widely recognised in other countries, it has become unfamiliar to people here.

“We need the public’s help to expand our pool of plasma donors and meet the targets which will help make England more self-sufficient in the supply of these lifesaving medicines.”

Dr Susan Walsh, Chief Executive Officer of Immunodeficiency UK, said: “Many people affected by a primary immunodeficiency, such as XLA, cannot make the antibodies they need to protect themselves against infection.  They rely on a lifesaving medicine called immunoglobulin to keep well and healthy. Immunoglobulin is made from human plasma and up to now the UK has been 100% reliant on plasma supplies from overseas.

“Removing the ban on the use of UK plasma means the UK can start to become more self-sufficient in producing immunoglobulin products. This is a tremendous step forward as it increases the security of supply of the treatment so many people rely upon to help keep life-threatening infections at bay. Please support this campaign and donate plasma, you are saving lives.”

A spokesperson for the Association of British Neurologists (ABN) said: “The ABN is delighted that plasma donations have commenced in the UK. For many years, the UK has been dependant on plasma donations from other countries. At times, there have been shortages for technical manufacturing reasons or because of high demand outstripping supply.

“In the serious, and sometimes life-threatening, neurological conditions of Guillain-Barré syndrome, myasthenia gravis and other rarer diseases, we rely on a ready supply of immunoglobulin to treat our patients. The potential to donate plasma in the UK is a very welcome development and we would encourage as many people as possible to consider plasma donation to support people with these conditions.”

Donors and patients supporting the campaign

Harley Penty, a six-year-old from Derby who survived cancer, will rely on plasma donations for the rest of his life.

“For us, plasma donation is more important than anything as without it we would not have our little boy,” said his mum Leanne, 37.

Doctors found he had no antibodies to fight infections which meant his gut had become infected, stopping him absorbing food.

“His skin was hanging off him. All his muscles wasted away. We could see his ribs and his whole body hurt,” said Leanne. “He was sick at least five times a day and had diarrhoea at least 12 times per day.”

Harley now has regular immunoglobulin infusions to protect him from infections. He’s having tests to establish if the chemotherapy damaged his immune system or whether he has an underlying immune disorder.

Leanne said: “I used to sit in the hospital being scared to sleep in case he stopped breathing in the night, it was traumatic.

“Now he is healthy, he loves sonic the hedgehog and dinosaurs and cars. He is very chatty and very loving.

“I see a lot about blood and platelet donations but I do not think people know a lot about plasma.  For us, we would ultimately lose him if people do not donate.” 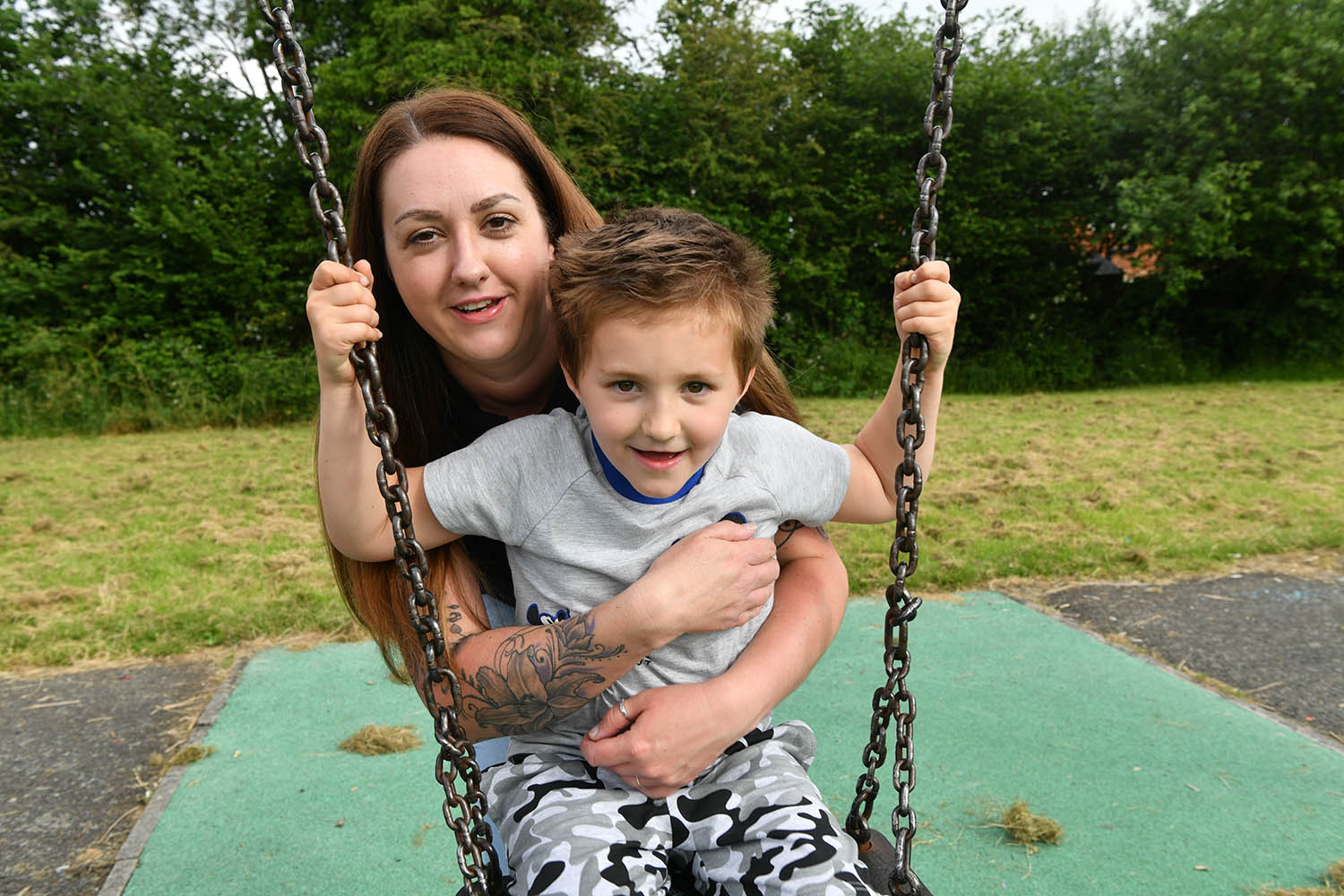 She went from the onset of symptoms to a coma in two weeks over May and June 2019, aged just 26.

The mother of one fell ill with the Miller Fisher subtype of Guillain Barre syndrome and ended up in the James Cook Hospital.

Simone, from Redcar, now aged 29, recovered from the immediate crisis with two transfusions of intravenous immunoglobulin.

The antibodies in the medicine helped regulate her own immune system and stop it attacking her own body.

“The whole thing was a scary experience. I woke in ICU with a tracheotomy, unable to breather without it,” said Simone, who is still living with the effects, including double vision which means she needs to wear an eye patch.

“The plasma brought me back to life, really. My parents were so scared I was going to die.  I would say to anyone who can donate, please do it.” 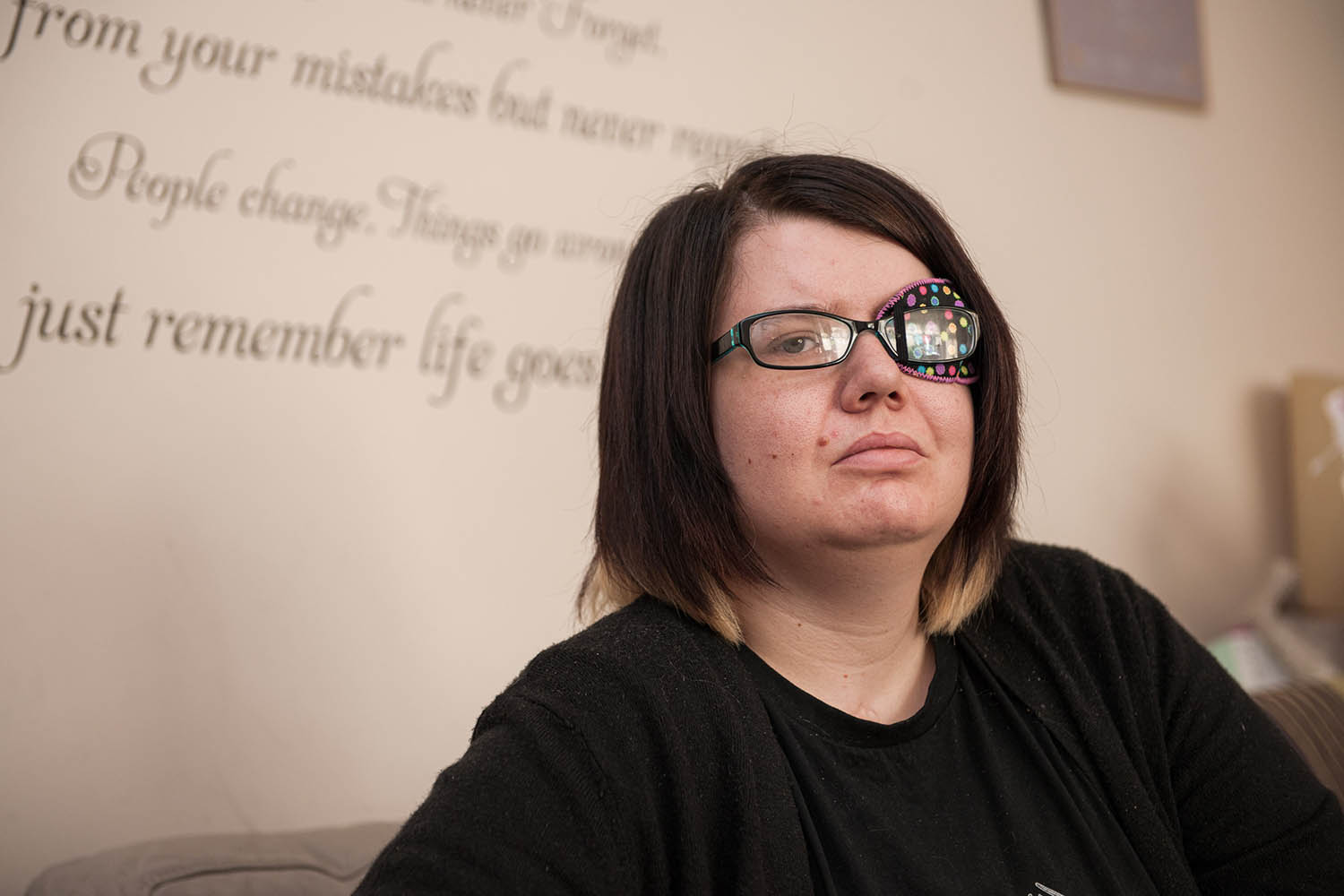 Xander Garrity has a rare genetic disorder called X-Linked Agammaglobulinemia (XLA). His B white blood cells, which make the antibodies that fight infections, do not develop properly.

“The GP told us they’d never seen a case before and most probably will never see another,” said his mum Stacey. “He was only the 169th person ever diagnosed in the UK.”

The 15-year-old from Moss Nook in Manchester has to infuse himself subcutaneously with immunoglobulins twice a week.

Stacey said: “Without plasma donations, in the long run, he would die.”

Today, Xander now largely lives an everyday life, though he has had many infections such as repeated mouth ulcers, respiratory infections, and an infected lymph node.

Stacey said: “Donation will increase the security of supply for a medicine that people like Xander rely on to keep them healthy and alive.” 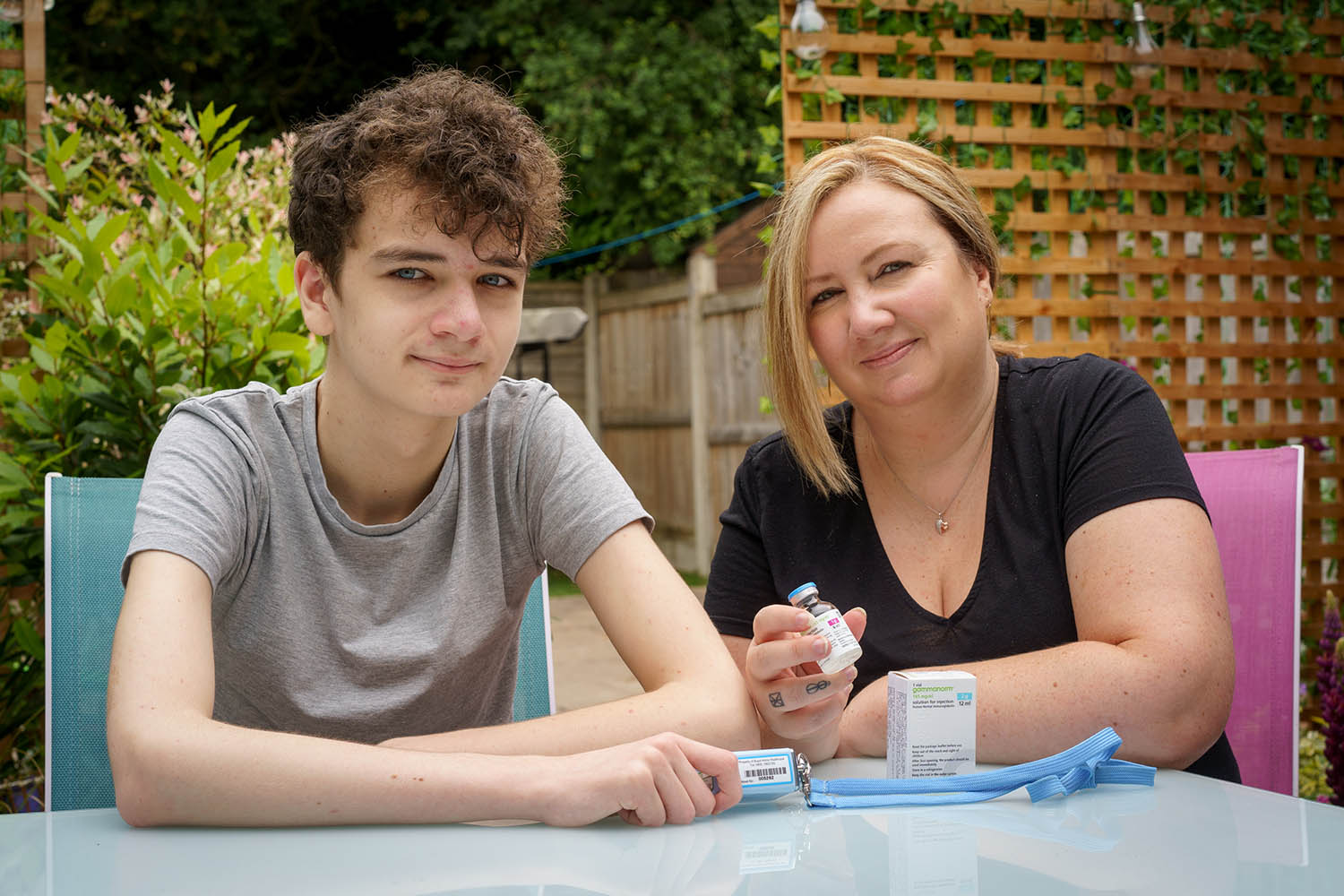 Darren Flaherty, 56, a contact centre worker from Stocksbridge near Sheffield, donated plasma in the 1990s and recently restarted donating plasma at Barnsley after the restriction on using plasma from UK donors was lifted.

He said: “Very few people know about plasma donation. I used to enjoy it because you just relax with your drink, so I was happy to start up again when I was asked. You can help someone, so why not do it?” 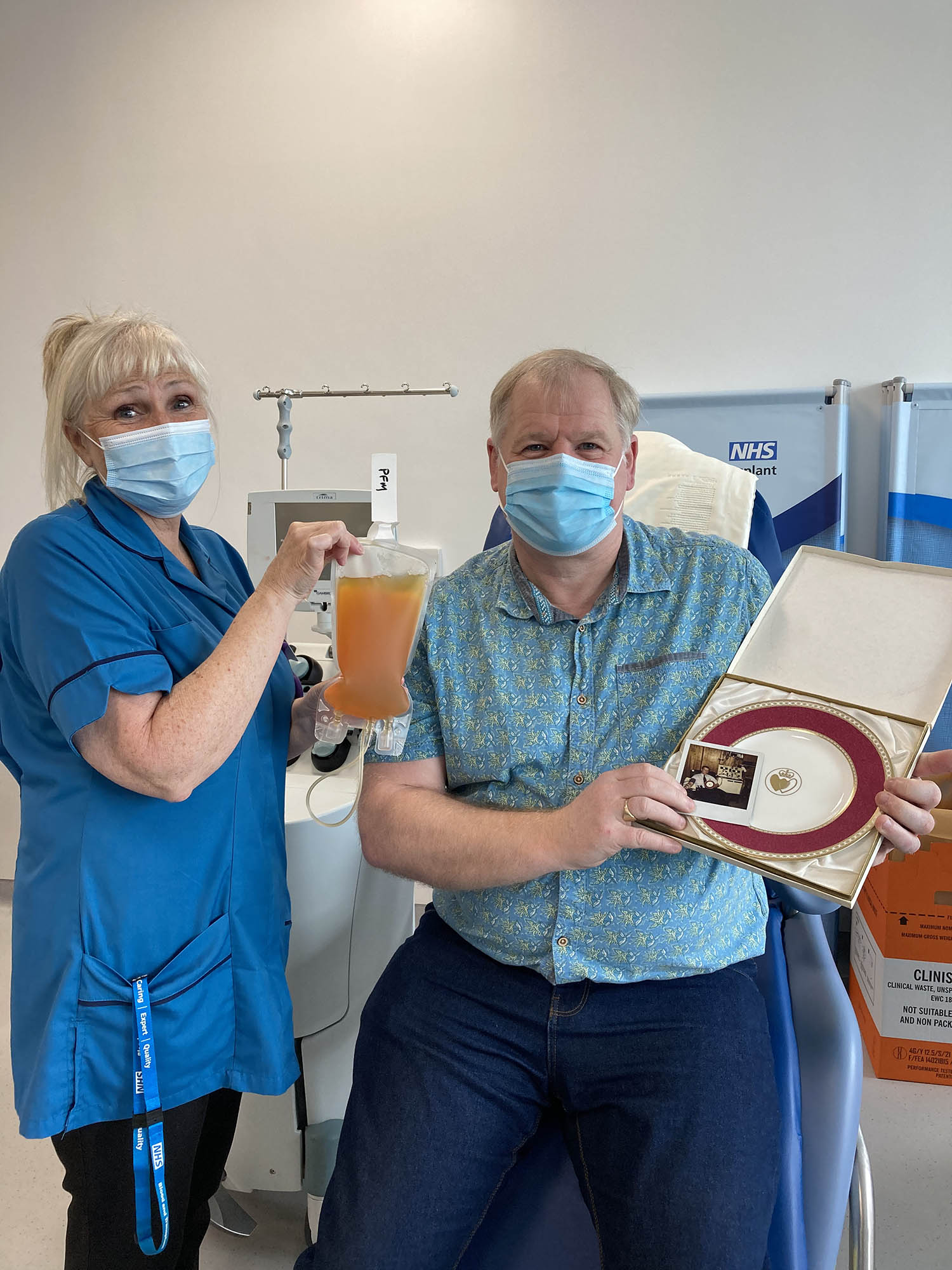